Hustings is a great word and is only ever used in the plural. This is because it needs more than one and we had six lined up, sitting at a very long table in a very grand room. All standing Councillors at the forthcoming Local Council elections and one rogue MSP, brimming with a passion for the Built Environment and keen to tell us their story.

The event was cleverly organised in three parts, the first an opportunity for each candidate to describe their credentials. These ranged from long standing service, insightful understanding, too youthful optimism. The second third centred on the candidates vision for Glasgow and we were invited to imagine the M8 transformed into a linear park, to a City which properly maintained its unique buildings. And finally the third, third when the audience were invited to grill the candidates.

The evening went quickly as we moved through our thirds and a host of important and fascinating topics were discussed. In the end I left the hustings with the strong feeling that there was a lot of common ground, and it was only when party political points poked above the parapet was clarity lost. Indeed three of the major political parties all promised a form of Heritage Commission or Municipal Enterprise. It is therefore a definite that this will emerge and our hope is that they get their heads together.

There was plenty of passion in the room when the wide ranging third third finally got underway and I have listed my top three topics of discussion as follows:

Heritage: Top off the list, the anger at the demolition and threat of demolition of Glasgow’s extraordinary heritage boiled over. In particular the neglect of listed buildings left to crumble, with the perceived expectancy of a clear site simply left the City cheated and robbed. The discussions went deeper than just the listed and included the core fabric of the city, the abundance of empty properties, the importance of retrofit and its relationship to embodied energy fuelled the debate.

Citizenship: The need for a City for Everyone and the importance of meaningful public consultation was made often and with a raised voice. This included more affordable housing, the availability of open space and the inclusion of active travel networks across Glasgow. We were asked to look out for improved levels of consultation as part of Planning Applications, and the opportunities for the general public to have a greater say especially in what gets built and what does not get demolished. Watch this space.

Planning: The panel brought some insightful points to the debate, I was impressed by their views on Planning process and how it is resourced. While those being grilled understood the need to train up fellow councillors on architectural issues and pointed out that legislation exists to resolve much of our concerns, less welcome was the news that the City is simply disempowered by lack of resource. This comes down to a finite budget and how it is allocated, fiscal reform while not promised was on the table.

Sustainability filtered through every discussion and at every turn, and I left the event with perhaps not a spring in my step, but at least a glimmer in my hope. I have purposefully not mentioned any of the Parties attending, less as a desire to be impartial and more as a statement to reinforce the need to work together. Thanks to the New Glasgow Society and the Glasgow Institute of Architects, please refer to the links below to find out more about their events, and the mysterious panel.

Chris is running for RIAS President and would be grateful for your support. The issues raised at the hustings and described above will form part of Chris’s manifesto for the presidency and he will be publishing further information over the next few weeks. More information on the election and Richard Atkins who is also standing is available at the following link here. 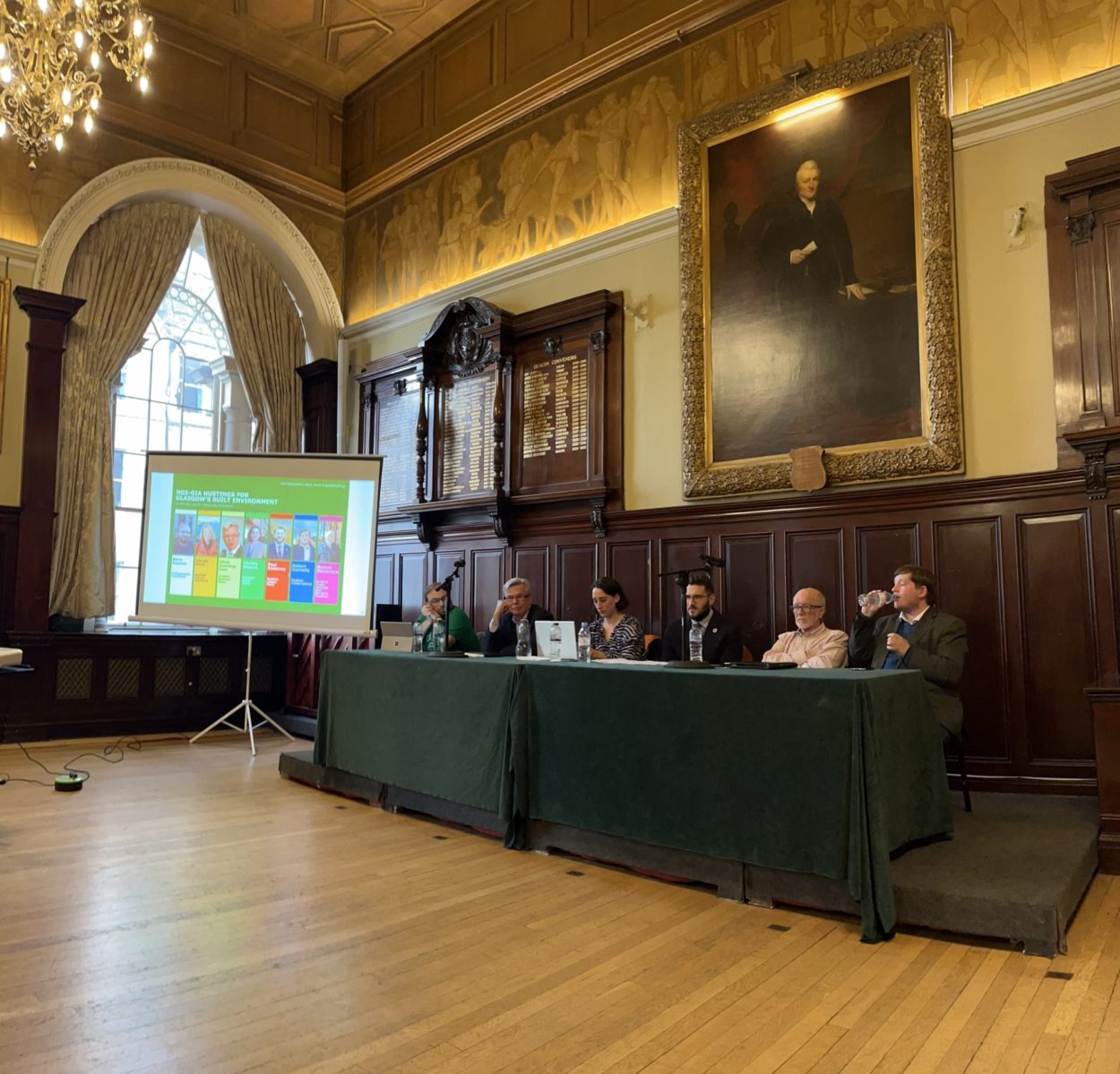